I attended the NWA Tech Summit this week on October 23rd.  In the spirit of Father Guido Sarducci’s Five Minute University, a year from now, here are the things I will remember being relevant for suppliers.

This was the hot topic for many packed breakout sessions.  The promise of supply chain transformation and food safety is being realized with Walmart at the helm, working to make it easier and faster for suppliers to connect to its Food Trust Blockchain. With the VP of Food Safety for Walmart, Frank Yiannas, announcing in September that its leafy green suppliers will be required to join the company’s blockchain by this time next year, resources are mounting to help smaller and medium-sized suppliers get blockchain ready.  Tejas Bhatt, Senior Director of Food Safety and Innovation, said that many larger suppliers are connected and the time for that to occur has been reduced from about a month to about a week. He said, this is not disruption, it is transformation.

Arkansas has the chance to leapfrog in this area of technology and Blockchain for Arkansas (BC4AR) is blazing ahead to develop the infrastructure needed for education, ways of working, regulation and platform development. The Walton College Blockchain Center of Excellence is scaling up its offerings and I announced that several companies from all over Arkansas are coming together to launch Blockchain Ready Studio, a consortium of tech companies, business consultants, experts in IoT, rural broadband providers and attorneys who can consult and help suppliers, farmers and truckers be prepared to connect to the right Blockchain for the right reason. If you want to learn more about Blockchain Ready Studio, email mjohnson@smartmediamindset.com. 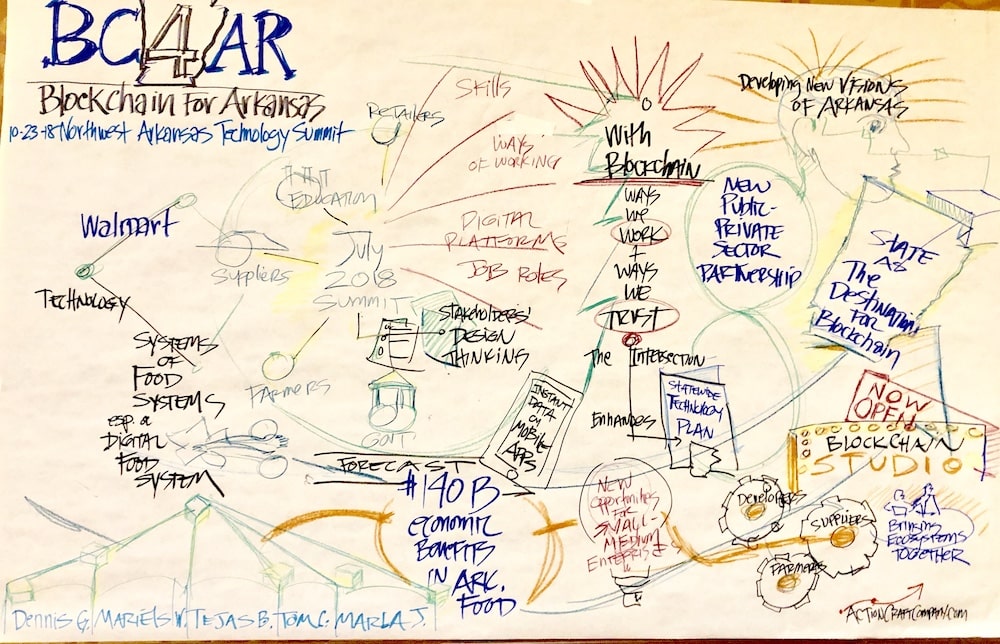 And to my friend (you know who you are) who said that he thinks blockchain is a solution looking for a problem, let me tell you about a man who told me the Internet was just a fad in 1996. As many of you food suppliers know, the agency that can accelerate this effort toward food safety, lack of waste, greater efficiency and appropriate transparency in our country’s food production system is the FDA. Look who just announced he is taking a job at the FDA – VP of Food Safety for Walmart, Frank Yiannas, the most passionate advocate for this I’ve met! Game on!

Craig Harper, J.B. Hunt CEO, gave a great keynote illustrating how far and quickly the driverless and electric truck technology has come, sharing the profound implications for both the transportation and energy sectors.  Multiple manufacturers are testing electric and self-driving trucks now. They look really cool! He described how eerily quiet they are, something to be addressed in terms of safety so we don’t have them sneaking up on us. In the hallway later, Craig held out a small zipper case and said that he meant to show this on the stage when he was talking. In the case was a battery, about the size of my laptop battery. “Hold it,” he said. I did and my eyes bugged out as I experienced how light it was. He said, “I charged my car with that today.”  I’ll be telling that story to my grandkids someday when that is commonplace.

I’m geeking out every day with our vendors and clients at Smart Media on this topic, so I was less surprised although equally impressed.  A plethora of companies are advancing, fast and furious, the opportunity for us to hyper-target our marketing efforts thanks to smartphones, advancements in AI and superfast cloud computing power. Again, the Governor and the State of Arkansas and AEDC are hoping to accelerate the development of our educational and regulatory infrastructure in the state so we can leap ahead as a global leader in these fields of technologies. For suppliers, you need to get your Omnichannel Marketing and Smart Media Mindset on so you can win more customers at Walmart and in other retail channels.

(Pun Intended) For all you suppliers out there, Jeremy King, CTO at Walmart, talked about how Walmart.com is picking up speed, literally. It is faster to load and better at returning search results. Walmart has been working with Google and Jeremy said that now 29% of the traffic coming to the site is coming directly from search on Google. (I think I got that number right but am willing to stand corrected.) Because Smart Media is experienced in optimization for Google and does item optimization and content development for suppliers on Walmart.com, I nearly jumped out of my seat. That’s fantastic for all of you suppliers who want your products to be found on the Internet AND on Walmart.com. The other big news is, of course, online grocery pick-up.  If you fit into that basket, let us help you get there. 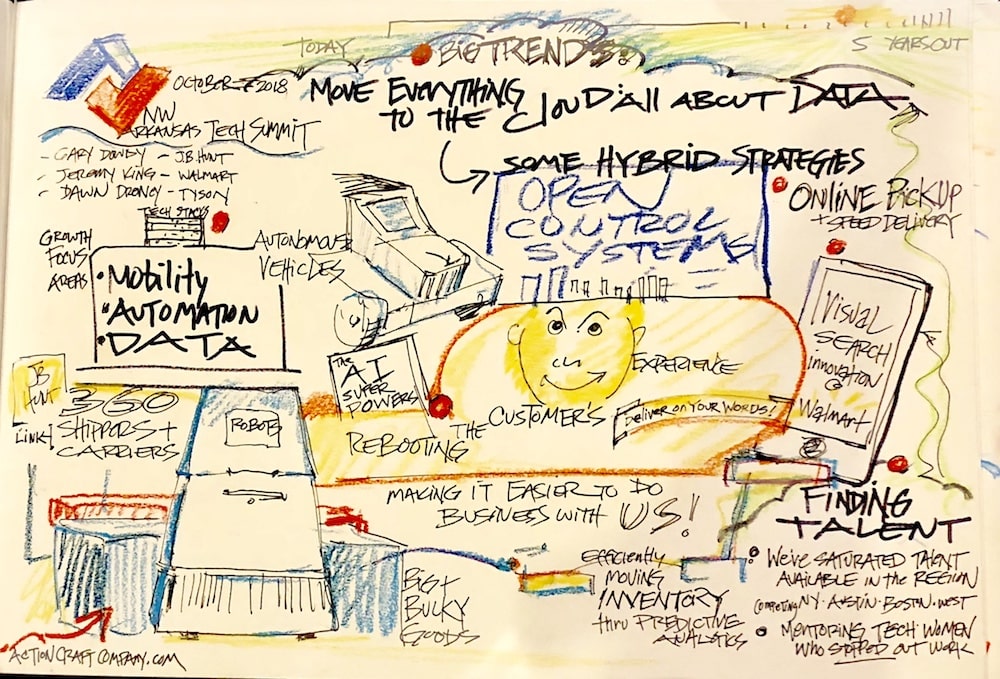 Lots of start-up companies were in attendance and the Tech Summit gave them a great venue at the VIP Reception for speakers and sponsors at Crystal Bridges on Monday night. We got to hear quick pitches from several start-ups and vote to give $1000 to our favorite company.  The winner was a company that created a crowdsourcing relief app called Crowd Relief and they are working with the victims of Hurricane Michael now.

If you are a parent or student in NWA, the NWA Tech Summit has a place for you. There were a lot of high school students from the Ignite project-learning program in Bentonville High School. They were asking good questions, gathering cool swag and talking to all the vendors. Sam Dean of the Amazeum spoke about kids and adults learning, collaborating, dreaming, empathizing, designing and MAKING. Our kids are coding and learning to learn.  Props out to all those teachers, schools and organizations like the Trike Theatre and the Amazeum who are helping prepare our children to thrive in this tech-savvy world we are creating. 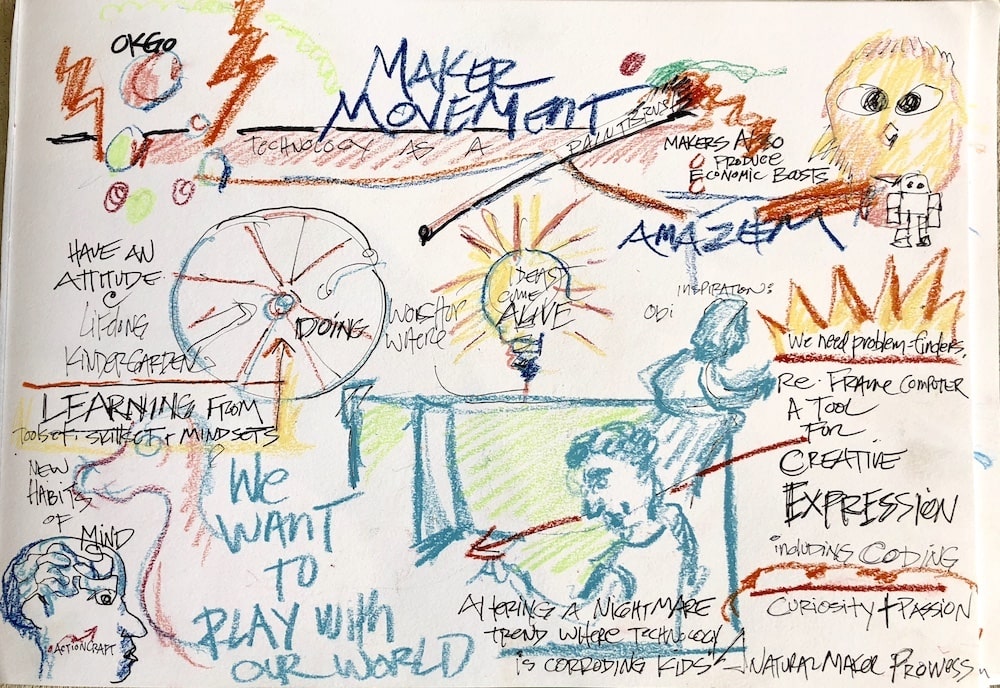 Overall the vibe was great, and I really enjoyed some stimulating and inspiring conversations. It was fun talking at Fiamma Ristorante afterward with other attendees who are cooking up new companies to leverage technology in our supply chain. I think that I heard there were 1600 people there, but after lunch, it was more like 800. Next year, I heard the convention planners hope to take it up a notch and turn the summit into a national level event. My two cents on that is to make it either two half days or a shorter day, ending at 2 PM.  People are so busy and have a hard time taking a whole day for it. Also, build into it some ideation and collaborative engagement, something we tech-lovers love! There was so much experience and wisdom in the room, I really wanted to hear more from the attendees and see less ‘sage on the stage,’ PowerPoint and panels. Speaking of which, big thanks to Ken Hubbell of ActionCraft Company who made the sketches at the Tech Summit that you see here in this article.